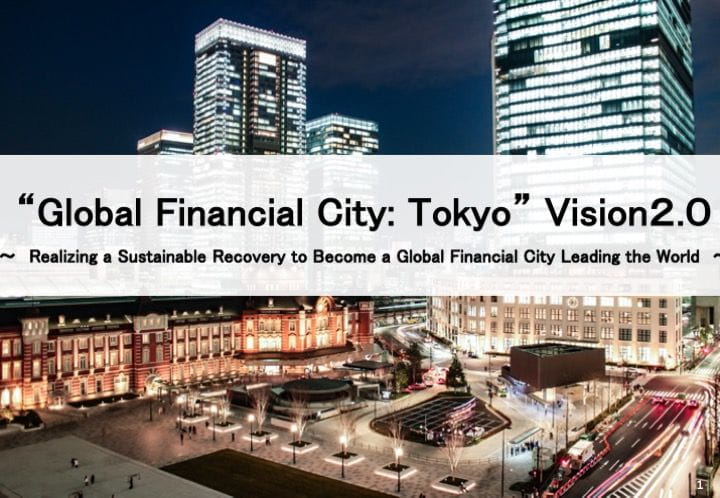 Hiroshi Nakaso
Chairman
FinCity.Tokyo
To play a unique role in the Asia Pacific region as a financial center, the Tokyo Metropolitan Government published “Global Financial City: Tokyo Vision 2.0” in November 2021, which is a revised version of the original vision formulated in 2017. It sets forth Tokyo’s key strategies. There are three pillars: (1) promotion of green finance through the Tokyo Green Finance Initiative (TGFI), (2) digitalization of financial services utilizing Fintech companies, and (3) accumulation of a wide range of financial players.

The global financial situation is in the midst of dramatic change.

The environment surrounding international finance is changing at a rapid pace, as seen in the changes in the situation in Asia and in European financial markets following the UK's exit from the EU (Brexit), the abolition of the London Interbank Offered Rate (LIBOR), growing global interest in sustainable finance, moves toward digitalization, and the COVID-19 pandemic around the world. In particular, in recent years there has been a rapid acceleration in calls for measures to deal with the climate crisis and initiatives to decarbonize the world.
Under these circumstances, green finance, which can help solve these problems, has been gaining attention and has become a major global trend.

Tokyo's position as a global financial city would be in jeopardy if the city cannot respond quickly to these drastic changes in the global financial environment. Amid intensified competition with other cities, such as Singapore and Hong Kong, to become one of the leading global financial cities in Asia, it is essential for Tokyo to appropriately and swiftly respond to the turbulent global situation in order to survive such fierce competition. With a strong awareness of these crises, the Tokyo Metropolitan Government (TMG) has decided to revise its "Global Financial City: Tokyo" Vision (hereinafter referred to as the "Vision"), which was formulated in November 2017.

To revise this "Vision," it is necessary to clarify the image of the city that Tokyo should aim for, with a view to taking advantage of its strengths, and to implement specific measures while focusing on key points based on challenges facing Tokyo. In addition, it is important to establish a system of coordination and cooperation with various stakeholders for the purpose of promoting the "Vision", as well as set specific goals, monitor their achievement, and further deepen such measures.

Based on these perspectives and taking into account its strengths, Tokyo, as a financial hub in Asia, aims to build an investment chain that links domestic and international capital demand to worldwide capital supply, against a backdrop of enormous domestic capital demand based on the existence of diverse companies and projects in Japan and domestic capital supply capacity. Here, Tokyo’s strengths include being the world's third-largest economy, the existence of approximately 1,900 trillion JPY in personal financial assets, high levels of comprehensive strengths as a city, political stability, and firm rule of law.

To this end, in accordance with the new "Vision", TMG will develop measures focusing on three pillars: ① Promotion of green finance, ② Financial digitalization, and ③ Accumulation of diverse finance-related players, in light of changes in the global financial environment and the challenges facing Tokyo.

The first pillar, "Promotion of green finance," has been studied by experts participating in a committee for the realization of the "Tokyo Green Finance Market (tentative name)."In June 2021, the study group compiled a report entitled "Tokyo Green Finance Initiative (TGFI): Proposals for Developing Green Finance." The report defines the "Tokyo Green Finance Initiative (TGFI)" as "a strategic initiative to develop Tokyo’s green finance ecosystem" involving a wide range of parties, not limited to the measures taken by TMG. It proposes the direction of measures to improve the lives of Tokyo residents and achieve sustainable economic development by creating a virtuous cycle of "environment" and "economy" from Tokyo and simultaneously promoting the green transformation of Tokyo's "urban system" and "financial system.” The contents of this report are fully incorporated in this "Vision."

In addition, as a foundation to ensure the effectiveness of the initiatives based on these three pillars, TMG will actively disseminate information (conduct promotion) regarding the "Vision" and the various initiatives based on it more than ever before. The Organization of Global Financial City Tokyo (FinCity.Tokyo, hereinafter referred to as "FCT"), Japan's first public-private financial promotion organization, was established in April 2019 bringing together various financial industry players. The positioning of FCT and the division of roles between FCT and TMG will be clearly outlined in the "Vision."

In order to promote this "Vision", TMG will work closely with the national government, FCT and other financial industry players, the City of London in the U.K., etc., and introduce target management using Key Performance Indicators (KPIs), thereby reviewing measures and creating new initiatives taking into account the status of achievement.

In an effort to evolve into the "Global Financial City: Tokyo" leading the world on par with New York and London, TMG will steadily promote the initiatives contained in the "Vision" with the aim of realizing Tokyo's "Sustainable Recovery", economic growth, and an affluent lifestyle for Tokyo residents.