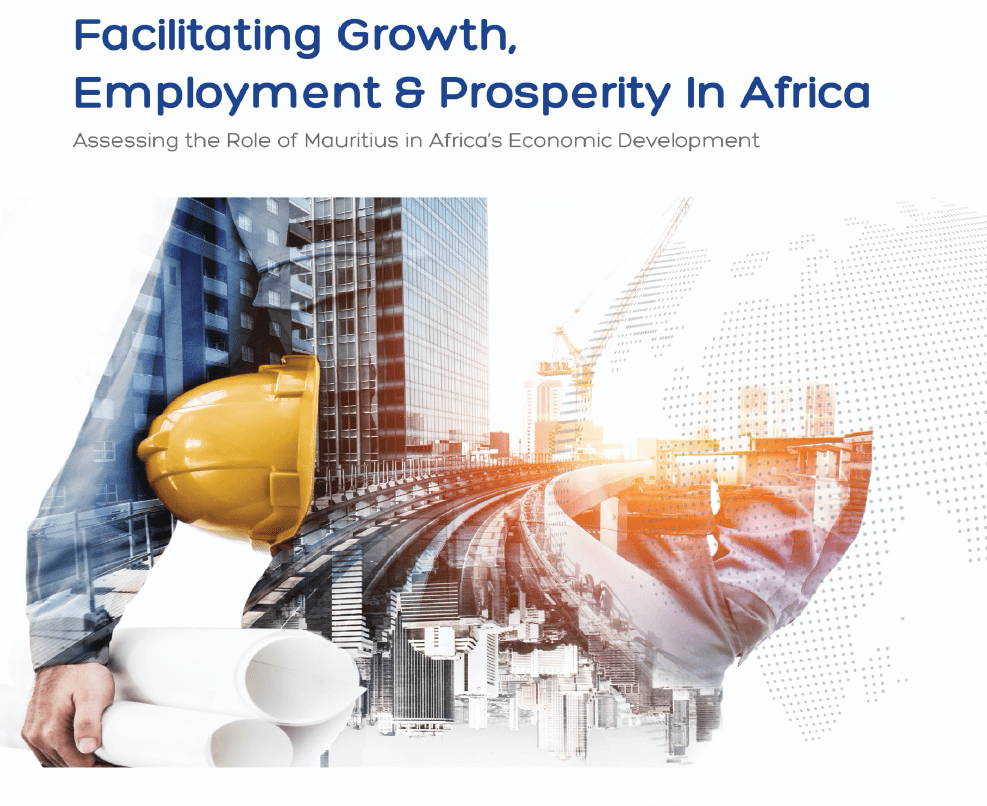 Why was this study commissioned?

Africa is rapidly emerging as a land of opportunities and the next frontier of growth, and the vision of the Government of Mauritius is to consolidate the position of Mauritius as a hub and a key enabler for driving quality investment into the Continent. This is an ambitious yet important strategy, and the Economic Development Board commissioned this study so that we document the role we have played for the region, learn from it, and ensure that the essential building blocks are laid to support and execute the Government’s strategy.

Over the last few years, in spite of numerous challenges, many African countries have embarked on a process of transformation, experiencing unprecedented rates of growth, a rise in trade and investment, and structural transformation. According to the IMF, for developing countries across Africa, foreign direct investment is a critical driver of future growth and development, thereby presenting an opportunity for the Mauritius International Financial Centre (IFC).

Our Mauritius IFC’s Africa strategy is underpinned by this appetite for foreign investments, for providing access to finance and expertise to and from Africa. Our strategy will not only contribute to the transformation of Africa into a prosperous Continent but will also create substantial spill-overs to the Mauritian economy across various segments and sectors of activities.

The most revealing picture emerging from this study is undoubtedly the fundamental role being actively played by our IFC in driving economic growth and prosperity in Africa, hence bringing a much-needed perspective on the value that our jurisdiction plays in this part of the world.

Why Mauritius could be considered as a role model for other African financial centers?

At the outset, I would like to spotlight Mauritius’ historical and important role as a connecting dot in the African region. Strategically located at the heart of the Golden Triangle, linking up Asia and Africa with the rest of the world, Mauritius emerged as a natural hub for maritime connectivity, as well as financial services activities. As early as in the 17th century, Mauritius was used as a regional payment and settlement hub by traders from the West, Middle East, Africa, India, and China. We also have a long history of banking, with the oldest commercial bank in sub-Saharan Africa operating from Mauritius since 1838.

Today, the financial services sector is one of the most vibrant and performing sectors of our economy. Mauritius has forged a strong reputation as a financial center, and our financial services sector has proven to be resilient in the wake of the Covid-19 pandemic, with a growth rate and GDP contribution estimated at 1.1% and 13% respectively for the year 2020, and a banking architecture that has transcended the minimum requirements of monetary soundness and capital adequacy.

With three decades’ track record in cross-border investment and finance, the Mauritius IFC is built on a robust ecosystem and is particularly poised to play a strategic role in attracting investments and promoting prosperity for and across Africa. The ambition of Mauritius to be one of the leading IFCs in the region stem from the role that we are already playing in acting as a catalyst to quality investments in the Continent.

The findings of this study document our commitment, highlighting that more than USD 80 billion of investments to Africa have been domiciled in Mauritius. One of the most prominent results of the study is the fact that Mauritius contributes to approximately USD 6 billion per annum in tax revenues for African governments.

Nonetheless, as you are aware, investors look beyond fiscal incentives to invest through an IFC. The investors notably look for trusted expert financial centers with stability, good governance, ease of doing business, economic democracy, and strong infrastructure – and Mauritius ticks all the right boxes.

As a highly stable and democratic country in Africa, Mauritius offers a suite of sophisticated products and services to serve the international investing community for their Africa-focused investments.

In fact, more than 40% of total investments from Mauritius into Africa, accounting for nearly USD 18 billion through our global business companies, are directed towards countries with which Mauritius does not have a tax treaty.

The country is home to a number of international banks, investment funds, accountancy firms, private equities, investment holdings, and other financial institutions. This constant support and continued trust by multinational financial services institutions vouch for the Mauritius IFC, and the distinct advantages that it offers.

What can you highlight about the role of Financial Centres on African economic recovery?

As the pandemic rumbles on and creates a widespread economic crisis, the need for tangible investment into Africa is being intensified in order to attain economic recovery. According to the World Bank, a faster recovery in the aftermath of the pandemic requires boosting investments and ensuring the establishment of a pipeline of well-defined projects which contribute to the growth and social cohesion.

As such, there is a dire need for Mauritius and other IFCs to play a strategic role in further stimulating foreign investment into the Continent, especially if Africa’s investment gap of USD 7 trillion is to be bridged in order to achieve the 2030 Sustainable Development Goals. A substantial amount of foreign investment into Africa will be required to meet the goals.

An IFC goes beyond just pooling of investments or generates financial returns - as the study has revealed, an IFC also conditions measurable, beneficial, social, or environmental impact for recipient countries. For instance, the report underscores that 4.2 million jobs in mainland Africa are supported by foreign investment mediated by the Mauritius IFC.

Africa is a growing market for Mauritius and the investment figures obtained from the Capital Economics survey bear testimony to this fact. Investment into East and West Africa over the past decade has increased by 29% and 27% respectively, while investment into Southern Africa has grown by 56%. The study also accentuates the fact that in the absence of stable financial centers such as Mauritius equipped with robust legal protections and the necessary expertise to administer transactions, risk-averse investors may choose not to invest at all.

Whilst we, African nations, embark on a path of economic recovery, I am confident that Mauritius possesses the necessary ingredients to espouse the continent in the quest to promote prosperity, economic development, employment opportunities, and enhanced quality of life required to reach the SDGs, particularly as the population of Africa is expected to almost double to 2.5 billion by 2050.

You can find more information about the study and download it here.